The Fortress of Baghras (Gaston or Gastein) 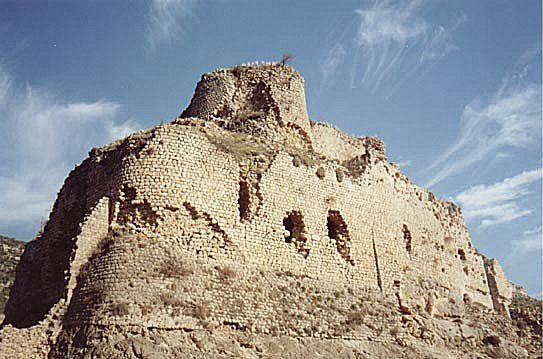 Turkey, province of Hatay, around 60 km north of Hatay (Antioch).

Controlling in the south the approach of the Belen pass(1), this fortress was, at the time of the Crusades, of primordial importance for the defence of the Principality of Antioch.

Known then as Gaston or Gastin - from the greco-Roman name Castron; today Baghras -, it passed under Frankish control in the years 1150, where the circumstances of its capture are not precisely known.

It turns out that in 1154, Brothers of the Temple held garrison there, as various chronicles report how a contingent of Templars of Gaston surprised and destroyed the body of the army launched by the Sultan Mas'ûd(2) in the gorge of La Portelle(3).

About 1170, the castle was taken from the Templars by the Armenian adventurer Mleh(4), renegade of the Order, passed to the pay of Nur Al-Din(5).

At his death in 1175, his former "brothers" reoccupied their citadel. Thirteen years later, on September 26th 1188, the sultan Saladin(6) seized the fortress, before dismantling it at the alarming announcement of the imminent arrival of the armies of Frederic Barberousse.

It was the knight Foulques de Bouillon(7) who recovered the citadel on account of his cousin, Levon II of Armenia. The latter settled there in 1191 and performed important restaurations.

In spite of ceaseless claims of the Templars and repeated interventions of the Pope, the Armenian sovereign agreed to return Gaston to his rightful owners only in 1216, when it was deemed hardly defensible from the armies of the Baïbars(8) which had just crushed Antioch, thus preferring to give up it after setting it on fire(9).

The citadel stands upon a rocky peak with sheer faces, especially to the west, so that defenses were rather established on the other faces.
On the east side, through which it was accessed, are two enclosures dominated by an imposing rectangular keep, all built as small compound.
In the court, are the grand hall, with remains of the fortress chapel still well preserved. Between the chapel and the grand hall, one will notice the underground rooms supported by enormous pillars. These rooms added to the numerous main buildings throughout the site, leads one to conclude that the place could maintain an important garrison.
Note also to the south west of the site the presence of a partly preserved aqueduct, which connected the fortress to the mountain where several springs emerged. At the foot of the fortress, lies a small but famous spring known as the Fountain of Gastin...

(1)The Belen pass was also known as the "Syrian Gates".

(2)Rukn ad-Din Mas'ud ben Qilij Arslân, or Mas`ûd 1st is a Sultan of Rûm of the Seljuk dynasty. He is born at the end of the 11th century. He is the third son of Sultan Qilij Arslan 1st. He succeeded his brother Malik Shah 1st in 1116. He died in 1156 and was buried in Iconium (Konya).

(3)Also called "Pas de la Portelle". That pass is located near the city of Payas (Turkey), around 30 km north of Baghras.

(4)Mleh was one of the sons of Léon (or Levon) Ist, sovereign of Armenian Cilicia. He was probably born around 1115-1120 and was killed in 1175. A rumor mentions him as Brother of the Temple after 1164, but he deserted soon to ally with Nur ad-Din, Emir of Aleppo and Damascus.

(5)Nur ad-Din Mahmud el Malik al Adil, Nur al-Din or Nureddin was Emir of Aleppo and Damascus. He was born around 1115 - 1117 and died in 1174. He was the second child of Imad ad-Din Zengi, the founder of the Zengid dynasty. Nur ad-Din became emir of Aleppo in 1146 on the death of his father. He fought constantly the Franks, especially in the territory of the County of Edessa.
During the Second Crusade, it is the announcement of the arrival of his army which forced the Crusaders to abandon the siege of Damascus.
His desire was to continue the project of his father, the unification of Muslim territories from Egypt, Syria and the Black Sea. His political maneuvers and shows of force made him the master of Damascus in 1154.
During the following decade, there were only gains and losses against the Christian armies. Regarding Egypt, he must contend with the armies of the king of Jerusalem Amaury 1st and local power. He will first send Shirkuh to try to take control of Cairo before Saladin seized the power. He died of fever in 1174.

(6)Saladin or Salah ad-Din Yusuf is the founder of the Ayyubid dynasty. He was born in Tikrit (now in Iraq) in 1138 and died in Damascus on March 4th 1193. He ruled over Egypt (1171) and Syria (1174) until his death in 1193. He was the son of Najm ad-Din Ayyub (Al-Malik al-Afdal Najm ad-Din Ayyub ibn Shadhi ibn Marawan), a Kurdish officer at the service of the emirs of Zengid dynasty.
In 1167, he accompanied his uncle Shirkuh in Egypt, at the request of the Emir Nur al-Din. In 1169, he was recognized as right-hand man of Al Hadid, the Fatimid caliph of Cairo, and in 1171, at the death of the latter, he seized the power and ascended the throne of Egypt. At the death of Nur al-Din in 1174, he went to Damascus where he was welcomed with triumph. However, he had to fight the governors who remained faithful to Zengid dynasty. In 1183, he managed also to take control of Aleppo. During his reign, Saladin will also fight Franks on numerous occasions, first under the reign of Amaury 1st, then under that of Baldwin IV and finally that of Guy de Lusignan. He won a major victory at the Battle of Hattin in 1187, before taking control of Jerusalem and face the armies of the 3rd Crusade, leaded by Philip II "Auguste" and Richard the Lionheart. In July 1191, he cannot prevent the Crusaders from seizing Saint-Jean d'Acre. In September 1191, he also suffered a defeat at the Battle of Arsuf. In 1192, he signed a peace treaty with Richard the Lionheart. He died at the beginning of March 1193 in Damascus.

(7)We know only little about this knight. The only thing we know is that he was related to the family of Levon II, King of Armenian Cilicia. He was maybe among the relatives of the first wife of the latter, Isabelle, herself niece of Sybille, third wife of Bohémond III of Antioch.

(8)Al-Malik az-Zahir Rukn al-Din Baybars al-Bunduqdari, better known under the name of Baïbars or Baybars. He was born on July 19th, 1223 north of the Black Sea in the territory of Kipchak (probably in present Crimea) and died on 1st July 1277 in Damascus. He was a Mamluk sultan of Egypt of the Bahri dynasty who reigned from 1260 to 1277.
Around 1240, he was sold as a slave and sent to Egypt. He was integrated in the Mamluk militia and entered the service of Ayyubid Sultan Salih Ayyub as bodyguard. In 1250, he actively participated in the overthrow of the Ayyubid dynasty in Cairo.
In 1260, he won an important victory against the Mongols at Ain Djalout. Back in Cairo, he overthrew the Sultan Sayf ad-Din Qutuz and proclaimed himself sultan.
Thereafter, his main objective was the destruction of the remnants of Crusader states. He captured Caesarea on 27th February 1261. In the following years, he managed to capture several important fortresses: Safed (25th July 1266), Jaffa (7th March 1268), Antioch (18th May 1268) and finally the "stunning" Krak des Chevaliers on February 8th, 1271.
He died possibly poisoned in Damascus in 1277.

(9)See that article about the surrender Baghras.