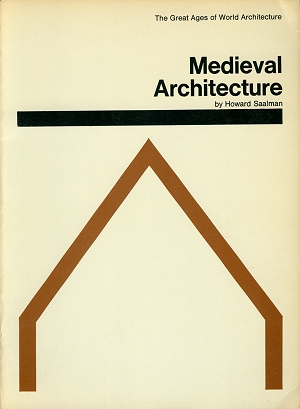 Until the eleventh century two distinct architectural styles, nourished by different roots, flourished in the medieval world.
The Carolingian-Ottonian tradition developed multiple levels of form and meaning. Beginning with the rather simple architectural treatment needed for a single martyrium, Carolingian art finally produced Charlemagne's Palace-Chapel at Aix-la Chapelle, the major monument of that age. The compound forms exemplified by double apses and multiple crypts led toward a complex treatment of interpenetrating forms and spaces, culminating in the sophisticated great cathedral at Speyer.

On the other hand, the international provincial architecture, sometimes called the 'premier art roman', developed in relative seclusion, uncomplicated by influences from the East. Solid, dark, almost huddled in complex arrangements of mass, these provincial buildings sustained a more direct link with the Roman tradition.

When these two early medieval strains had combined, medieval architecture entered its definitive phase: the Romanesque. Reflecting the essentially simple social, political, and ideological order of feudal Europe, architectural expression became clear and forceful in form.
Romanesque culture was truly international, with princes and prelates in almost constant motion from the Baltic to southernmost Italy. Burgundian elements of design became fused with Rhenish; Norman forms were familiar not only on the continent, but also across the English Channel.

As socio-political life became more complicated in the waning Middle Ages, so did architecture. By the twelfth century, building became characterized by an over-abundance of detail and pronounced subdivision of spaces and forms, signalling dissolution of the Romanesque.

Howard Saalman is an Assistant Professor at the Carnegie Institute of Technology in Pittsburgh.