A short History of The Knights Hospitaller of St John of Jerusalem, of Rhodes and of Malta
(Empire Press Malta - 1970) 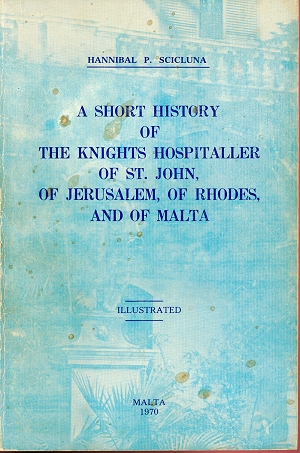 A "short history" is bound to be something of a contradiction, and particularly so where the subject entity is little less than a thousand years old. Such a brief outline must also contain many over-simplifications and generalisations for which I beg the reader's indulgence.
My bibliography includes, I believe, most of the essential references and source works to which the specialist may have recourse.

This little work is, I think, unique in one respect. It contains, for the first time under a single cover, references to the principal non-Catholic (or non-Roman, if you will) bodies whose claims to be true children of the original foundation have been recognised in one way or another by the parent and Sovereign body.
I am not unaware that there are other bodies (e.g. the British Masonic Order of St. John and of the Temple) using titles and descriptions which indicate their own claims to historic roots, common with those of the more widely recognised bodies.
Whatever their sources or their particular pretensions, those Orders too, must share a great part of our history and of our ideals. Their existence is sufficient evidence of the attraction and the persistence of those ideals.

Sir Hannibal Publius Scicluna, Kt., M.B.E, Kt. Gr. Cross of Magistral Grace with Riband of the Sov. Mil. Order of Malta, Hon. M.A. (Oxon), Hon. LL.D. (Malta), F.S.A., L.P., was bom in Malta in 1880. He is the oldest surviving Knight of Malta and, probably, of the eight other orders of chivalry of which he is a member.

His writings include a number of monographs on the history of his native Islands and of the Order of St. John as well as his well known "Documents of the French Occupation" and the monumental study of the Church of St. John in Valletta.
He was for many years Librarian of the Royal Malta Library and Director of the Museum; but perhaps the most valuable contribution to Scholarship has been the unfailing help which he has always extended to students of all nationalities, professional and amateur, of any period of Maltese history which is, in microcosm, a history of the Western World.