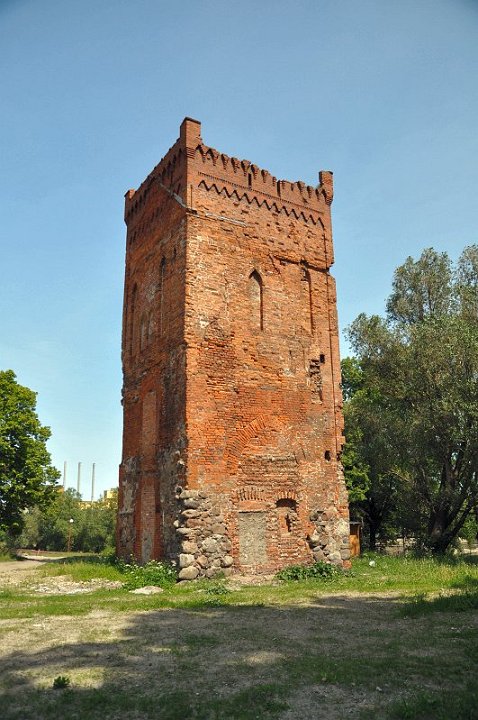 Poland, Warmian-Masurian Voivodeship, town of Braniewo, around 40 km north-east of Elbląg and around 5 km south of the border of the Russian enclave of Kaliningrad.

A few years after its arriving in Poland(1), the Teutonic Orderr already had invaded the territory of the Old-Prussian Tribe of Warmians(2). After these invasions, the diocese of Warmia(3) is created in 1243. The running of the new diocese was divided between the Bishop and the Canons Chapter, at the rate of 2/3 for the former and 1/3 for the latter.

The bishop of Warmia chose Braunsberg (from the Old-Prussian name of Brausebergue, Braniewo in Polish), located at the mouth of the Pasłęka River on the "Zalew Wiślany"(4), as seat of the diocese. Firstly, they began the construction of a gród(5) they transformed later into a stronghold, and at the same time they began also the construction of the first cathedral of Warmia, dedicated to St-Andrew Apostle.

During the Second Old-Prussian Insurrection(6), the town of Braniewo was destroyed and the cathedral severely damaged. The Bishop and the Chapter focused their attention then on the place of Frombork, finding it more favourable for the rebuilding of the seat of the diocese and the cathedral. In 1279, Bishop Henry I Fleming(7) moved officially the seat of the diocese from Braniewo to Frombork, and began the construction of the new cathedral.

At the same time, at the end of the war against the Old-Prussians, the Chapter with the agreement of the Teutonic Order, began the construction in Braniewo of a stone castle (or stronghold) at the location of the old gród.
The first construction phase consisted in building a square on the left bank of the Pasłęka River. The southern part of the wall was kept for housing, while the northern and western parts for outbuildings. The entry of the castle was in the eastern part of the wall, in the middle of the curtain and protected by a tower.

In the beginning of the 14th century, the castle was extended to the east. On that side, the low yard (or bailey) was built roughly the same size as the castle itself.
The south part of this low yard is still reserved for housing. The last phase of building the castle occurred in the second half of the 14th century, with the construction of outbuildings on the east side of the low yard.
At the four corners of the whole castle, squared towers were erected. On the town side, a deep and large moat was dug out. On the latter fed by the river, the entry was fortified by the construction of two towers and a curtain above the moat. Access to the castle through the second tower was via an enclosed corridor.

In 1396, during a peoples revolt, the inhabitants of the town destroyed the towers and the wall on the western side of the castle.
On February 6th 1454(8), the inhabitants attacked the castle and seized it. Finally and reluctantly, they put it into the hands of the Polish Army. But, a few years later, during the night of September 10th to 11th 1461, furious against the polish occupation, the villagers besieged once again the castle, seized it again and killed the entire Polish garrison.

During a Two Years War between the Order

and the Polish Kingdom, the Great Master of the Teutonic Order, Olbrecht Hohenzollern, seized the castle by trick on springtime 1520. On July 7th the Polish troops tried to seize it back, but the Teutonic Garrison resisted the assault.

After this war, the castle reverted to the Bishop of Warmia. During the period of the First Partition of Poland(9), the castle was located in the Prussian side. The authorities then decided to put a school within its walls.
In the 1920-s, the castle was rebuilt, but burned in 1945.

Parallel to development of the castle, the small village of Braniewo also developed into a powerful fortified city.
A double line (doublet) of walls protected the city. On these walls were between 10 and 20 watch towers and 8 gates.

In 1261 the city was burned by the Old-Prussians. After that arson, the city was rebuilt in the shadow of the castle and repopulated by inhabitants from Lübeck.
In 1284, Braniewo get commecial privileges according the Lübeck Law(10).

Its place at the mouth of the River, on the banks of "Zalew Wiślany", made the town one of the most important harbours in the area. From the second half of the 14th century, Braniewo was integrated in the powerful Hanseatic League and greatly benefitted from the "Prawo Skladu"(11).

In the Middle Ages, Braniewo owned its own merchant fleet. At that time, the "Zalew Wiślany" was accessible via Cieśnina Piławska (Strait of Baltiisk) nowadays located in the Russian territory of the Oblast of Kaliningrad.
But, with the development of ships, the increase of tonnage and draught, the access to Braniewo by the Strait became less and less easy and the power of the city began to decline.

Nowadays, of the Teutonic fortress only a tower remains as the entry point between the Castle and the low yard. As for the city, there only remain parts of its walls and a few towers.

(1)The Teutonic Order arrived in Mazovian on invitation by the Duke Konrad Mazowiecki around 1226 - 1228. The Teutonic forays into Warmians territories dated from 1230.

(2)This region, nowadays located on North-east of Poland (also called Borders or Marches in English) was occupied by several Old-Prussian and Baltic Tribes, among them the Pomeranians, Pomesanians, Warmians, Semigalians,... Follow this link on Wikipedia to have a glimpse of this tribes.

(4)Zalew Wiślany is the lagoon formed by the Vistula River at its mouth. This lagoon is separated from the Baltic Sea by the Peninsula of the Vistula and flows into it via the Cieśnina Piławska (Strait of de Baltiisk) located in the Russian territory of the Oblast of Kaliningrad.

(5)A gród is a fortification made of wood and of clay, often a small village or hamlet of some houses surrounded by a boarding, with or without keep or watch tower.

(6)This second insurrection began on 20 September 1260, the day after the defeat of the Teutonic Order against a coalition of Lithuanian and Samogitian tribes during the Battle of Durbe. This defeat of the Order provoked an uprising, which spread rapidly throughout the territory of the Old-Prussian tribes. The various castles of the Order were besieged, and the smallest ones began to fall into the hands of the Old-Prussians. Despite the arrival of numerous reinforcements from the German Empire and all of Europe, it was not until 1265 that the Teutonic Order began to defeat its enemies. It would be a few years before the various chiefs of tribes were defeated and hanged, during the winter of 1271-1272. In 1274, the Order attacked Lidzbark Warmiński, captured the last rebel leader and executed him, thus causing the end of the uprising.

(8)It is the Thirteen Years War, a new war between the Teutonic Order and the Kingdom of Poland from 1454 to 1466. It ended with the victory of Poland and the 2nd Treaty of Toruń signed by both belligerents in 1466.

(9)From the end of the 16th century and due to problems of dynastical succession, the King of Poland was elected by the nobility. This nobility profited of the weakening of the royal power such that it was granted more and more private privileges to the detriment of development of the country. That "dissolution" of the royal power resulted in the immediate neighbours of Poland (Russia, Prussia, Austria-Hungary) viewing the rich polish estates with more and more ambition such that, in 1772 those three powers colluded to partition the Polish country among them. In 1795, at the moment of the Third Partition, Poland disappeared from the European map.

(10)The Lübeck law was the constitution of a municipal form of government developed at Lübeck, after it was made a free city in 1226. The law provided for self-government. In theory, that law made the cities to which it applied independent of royalty. The Lübeck law stipulated that a city should be governed by a Council of 20 members.