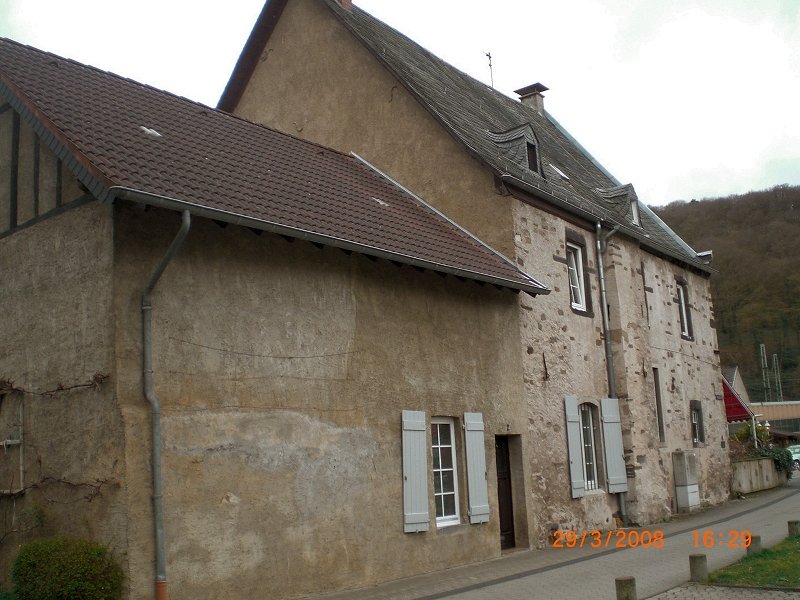 Germany, state of Rhineland-Palatinate (Rheinland-Pfalz), around 30 km north-west of Koblenz, district of Ahrweiler.

The small city of Bad Breisig on the left bank of the Rhine and around 60 km upstream of Cologne was the seat of an important preceptory of the Templar Order in the west pat of the Holy Roman Empire.

Located on the border between the Archdiocese of Trier and Cologne, it was probably the result of a donation made by Count William III of Jülich(1) who participated the Fifth Crusade and died in Damietta in 1219.

A first trace of the Templar Order is mentioned in a donation act of the Convent St Florian(2) of Koblenz to the Templars of "Brysich" in 1215.
Cesarius von Heisterbach(3) in his work "Dialogus miraculorum" written around 1222 mention a Templar chaplain, "Eynolphus", died in "Briseke villa diocesis Coloniensis".
In a charter dated from March 12th 1227, Count Heinrich von Sayn(4) and his wife Mechthild von Landsberg, and Countess Ada of Looz(5) gave to the Templar Order all the rights they had on the property of Knight Konrad von der Mülhen except those relatives to Brohl.
In 1231, a named Alveradis, widow of Bruno, made a donation of three "solidi" of Cologne to the Templar house, payable to the Hospitaler House near Burg.

If Templars seemed indeed present in Breisig during the first three decades of the 13th century, it is only in 1237 that for the first time is mentioned a preceptor of the house of "Brisike". In that document, it's noticed that a house of in Cologne depended on the preceptory of Breisig.

The few acts in the passing centuries did not allow to establish completely which properties depended on that preceptory. However, its influence was from Cologne on north to Frankfurt on south.

Many geographic names are reminders the presence of Templars in this region:

In 1258, a named Hugo von Merl, templar of the preceptory of Breisig was mentioned in Akko.

However, from 1278, Templars of Breisig seemed have been forced to sell several of their properties and annuities. The decline of Templars in that area was still demonstrated by the fact that only one preceptor managed the preceptories of Breisig and Bad Hönningen.

After the dissolution of the Order, templar properties were transferred to the Order of St John.

The preceptory of Breisig was located outside the walls of the city. Its buildings were destroyed almost completely during the 30 Years War(1).
In 1657, the Hospitallers proceeded with important renovations and modernizations. The Templar chapel build around 1245 was devoted to St-Donat. It owned a relic of the True Cross and was destroyed in the beginning of the 19th century. Its remnants have been the subject of archaeological searches between 1910 and 1955.
Today, there still remains a building of the old preceptory, probably the chapter house.
The parish church of Breisig still holds today the relic of the True Cross.
We can see another remnant of the preceptory of Breisig in a manuscript of the 13th century of the parish church of Königswinter describing the privileges granted by the Pope to the Templars.

Name of Templars mentioned in document regarding Breisig :

(1)William III of Juliers succeeded his uncle William II in 1207 as count of Juliers. He was the son of Eberhard II of Hengebach and Judith of Juliers. He participated in the Fifth Crusade, but died during the siege of Damietta in Egypt, in 1218 or 1219.

(2)This convent of canons was established around the year 1100, in the north part of the old town of Koblenz, along the Moselle River.

(3)Caesarius of Heisterbach is a Cistercian monk, prior of Heisterbach Abbey. He was born about 1170 - 1180 and died around 1240. He entered the Cistercian order around 1199 at Heisterbach. He quickly became master of the novices and in 1228, he became prior of the abbey.

(5)This Ada of Looz is undoubtedly Adelheid von Henneberg, daughter of Poppo VII, Earl of Henneberg and Elisabeth von Wildburg. Around the years 1220-1225, she married Louis III, Count of Looz at the death of his father Gerard III.

(6)The Thirty Years' War was a series of armed conflicts that have torn Europe from 1618 to 1648 and was the backdrop of religious problems between Catholics and Protestants.