The castle of Castelo Branco 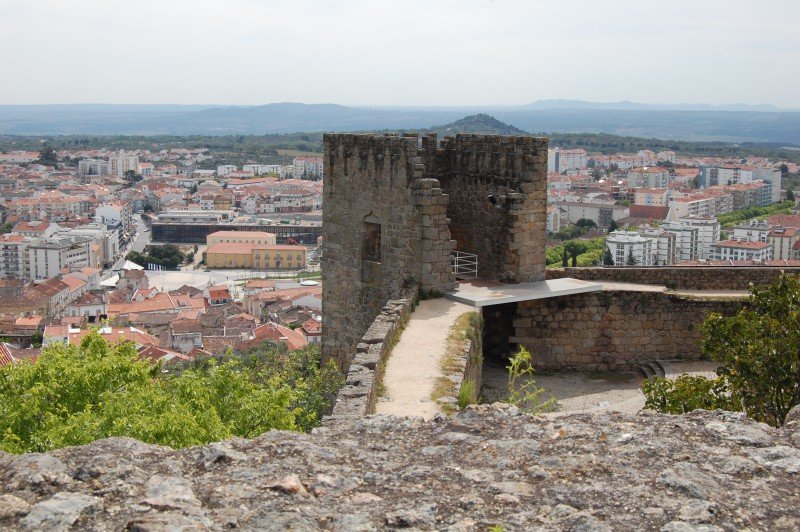 At the time of the Christian reconquest of the Iberian Peninsula, the region of Castelo Branco was taken over from the Moors in 1165. The same year, King Alfonso I gave this vast territory located between the rivers Erges, Tage and Zézère to Gualdim Païs, Master of the Order of the Temple in Portugal. This donation had as objective, the settlement and the defence of this country, in front line with the Muslim lands.

That strategy of the young Portuguese monarchy will prove effective on two levels:

In 1185, at the beginning of the reign of king Sancho I, the territory of the present Castelo Branco was part of a property called "Herdade de Cardosa", itself detached from the municipality of Covilhã.
A few years later, in 1198, the donation to the Templars was revised : half of this country was put under the authority of Fernando Sanches(1).

In 1209, Fernando Sanches sold the city, lands and revenues to João Domingues, Master of the Order of the Temple in Portugal. However, this donation was accompanied by 3 conditions:

In 1214, King Alfonso II again bought this territory on behalf of the Portuguese crown and made a new donation to the Templars, the latter benefiting this time from the total possession of the estate including among others, the entire city of Castelo Branco.

In 1215, a bull of Pope Innocent III confirmed this donation and indicated:
"... the Templars founded a city and a fortress on the border with the Moors in the place of Cardosa to whom they gave the name of Castelo Branco ...".
Some historians argue that Templars would have taken over the Roman name of the site: Castraleuca.

Like the other important medieval settlements, the city of Castelo Branco was built around its castle, its buildings, its church (Santa Maria) and its walls pierced with 4 doors called: porta do Ouro, porta do Santiago, Porta do Pelame and porta da Traição.

Between 1214 and 1230, Castelo Branco became a solid element of the Christian defense line with the castles of Almourol, Monsanto, Pombal, Tomar and Zézère. This system of protection was called Linha da Raia (line of the Queen) or Linha do Tejo (line of the Tage).

In addition to its integration into the protection system of the center of the country, Castelo Branco was chosen in 1214 as the seat of the Order of the Temple for Portugal after Tomar.
It will keep this charge until 1314, date of dissolution of the Order.

The new status of the stronghold allows the Master of the Order of the Temple in Portugal (Martim Sanches or Estevão Belmonte) to decide on the construction of the "Palacio dos Comendadores" (Palace of the Commanders) in 1229.

The Portuguese Templars do not escape the dissensions that exist throughout Europe between their Order and the clergy. A document relates that in 1245 the Templars of Castelo Branco are obliged to give the bishop of Guarda(2) a suitable place for the construction of a new house.

The extramural development of the city will take place during the reign of King Denis I, thanks to the increase of the population and the appearance of an enriched bourgeoisie. A new urban center will be organized around the S. Miguel church built northeast of the wall. The latter quickly became the 2nd parish of Castelo Branco after that of Santa Maria.
This growth is accompanied by the relocation of political, economic and administrative centers of the city that descend to neighborhoods near the walls.

At the dissolution of the Order of the Temple, the Order of Christ takes over all of its property and rights and continues its missions. More than ever supported by the Portuguese monarchy(3) which fully controls this new Order, Castelo Branco continues its expansion.

From 1343, the various Portuguese sovereigns continue the development and restoration of Castelo Branco: an octagonal tower dungeon is added, a second wall is erected and the ramparts have 7 gates.
Castelo Branco retains military and strategic importance until the end of the wars between Portugal and Spain(4).

In the 16th century, the city strengthened its position thanks to the construction of 2 convents, the great S.Miguel church, the present cathedral, and the construction by the Bishop of Guarda, D. Nuno de Noronha of a palace surrounded by gardens.
But the event that will undoubtedly build the city as capital of the region is the creation in 1771 of the diocese of Castelo branco by the Marquis de Pombal.

(1)This is undoubtedly the infant Don Fernando, 3rd son of King Sancho I. He was born in 1188 and died in 1233. In 1212 he married the Countess of Flanders, Joan of Constantinople.

(2)The bishopric of Guarda was created in 1199, after the reconquest of these territories by King Sanche I. In 1245, the bishop is a certain Vicente Hispano.

(3)The King of Portugal is also Grand Master of the Order of Christ.

(4)These are conflicts that History has retained under the name of "Fernandine Wars". These wars unfold in three phases, from 1369 to 1382. They are the consequence of a war of succession to the throne of Castile between Ferdinand I of Portugal and Henry II of Castile, then the son of the latter, Jean I, after the Death of King Peter I of Castile, death without heir.