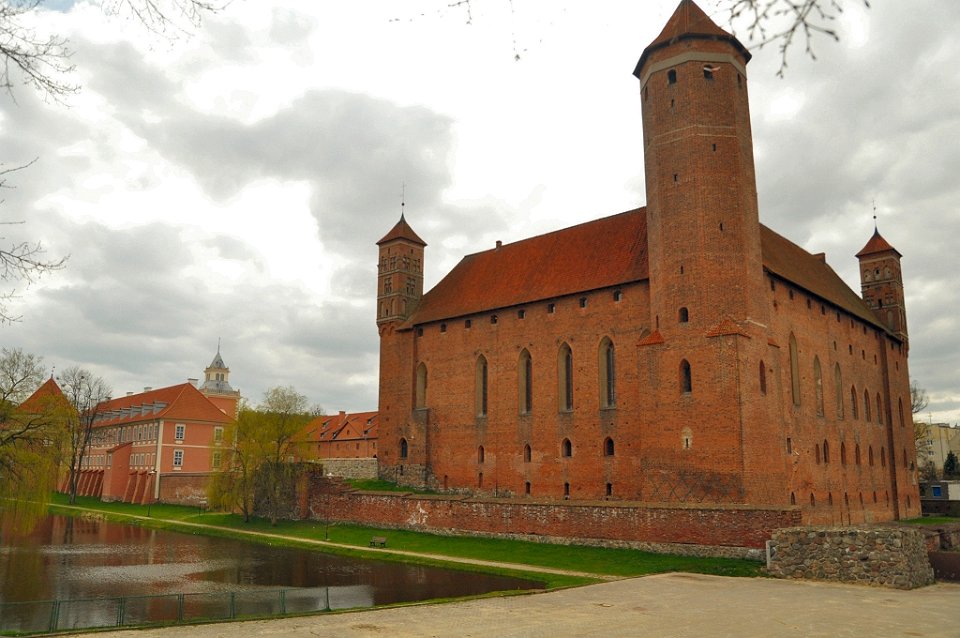 Poland, Warmian-Masurian Voivodship, city of Lidzbark Warminski, around 50 km north-east of Olsztyn, around 100 km south-east of the Russian city of Kaliningrad.

A decade after their arrival in the Lands of Chełmno(1), Teutonic knights began the conquest of the lands of the Prussian Tribes located east of the Vistule River. Around 1240, after fierce fights, they seized a stronghold called "Lecbark". Place of strategic importance, the Order build an advanced post equipped with a wooden watchtower.

Further to its political control of new conquered lands, the Order transfers this village under the authority of the Bishop of Warmia.

A new village is rapidly settled near this small fort, and in 1308, Eberhard of Nysa(2), Bishop of Warmia, granted the status of city to this colony and encouraged the arrival and settling of new colonists from Silesia.

In the second half of the 14th century, the bishop let construction begin to build a brick castle to establish the seat of his bishopric.
The castle is built on a small promontory at the confluence of two rivers, the Symsarna and the Lyna. The construction is done on the classic plan of a quadrilateral including a castle and a lower ward.

The first phase of construction of the castle took place between 1350 et 1355, under the direction of the Bishop John of Meissen(3). His successors, John Stryprock(4) and Henry Sorbom(5) continued the works.

At the end of the 14th century, the castle, which is an almost perfect square of 48m a side, is practically finished. Different wings are fitted out to meet the needs of the status of the castle, with a dormitory, a chapel, apartments of the bishop, chapter house, refectory, but also with granaries, cellars, a brewery, kitchens, a bakery, armoury, watchroom,...

Three corners of the castle are topped by small square towers. In the north-east corner, is a big salient tower which dominates the whole. A crenulated wall covered by a roof made the junction between these different elements. Imposing moats completed the defensive system of the castle.

In parallel to the development of the castle, the city also expands and is surrounded by imposing fortifications of more than 1000m in length. That makes the place one of the most fortified in Prussia. These battlements were set up by walls of 5m high, several watch towers and fortified gates. Different renovation and improvement works increases the height of the walls up to 7m.

Besieged well and good, Bishop Francis Kuhschmalz(8) must resign himself to hand over the castle to Polish troops who leave behind a garrison of Czech mercenaries.

In 1461, Bishop Paul Legendorf(9) takes back the seat of his diocese, but stays under the protection of the King of Poland, with whom he signs an independent peace treaty in 1464. The Teutonic Order will come to lay siege upon the castle, but doesnt manage to get inside. The Treaty of Torun, signed at the end of that war will grant all the region of Warmia to the Polish Kingdom.

In 1520, during the last war(10) between the Order and Poland, the castle is once again besieged by Teutonic Army, but the heroic defence of the Polish garrison prevent its capture.

After these warring periods, the castle will remain the seat of bishopric of Warmia and each of its occupants will improve it to become the castle we can see now.