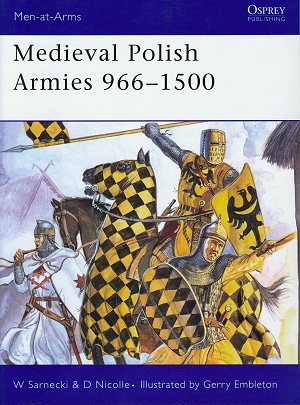 This book describes the organization and illustrates the equipment of the armies that shaped the remarkably varied and colourful history of medieval Poland.
It traces them from the birth of the Christian kingdom in the 10th century, through the 'Northern Crusades' and the wars against the Teutonic Knights, to the extraordinary 15th-century expansion under the Jagiello kings, and the first confrontations with the Ottoman Turks.

The text is illustrated with an unusually rich collection of memorial sculptures, early paintings, photographs and drawings of surviving artefacts, and has full colour reconstructions by the respected medieval specialist Gerry Embleton.

WITOLD SARNECKI, born in Poland in 1974, gained his master's thesis in art history at Jagiellonian University, Cracow, in 1997, and specializes in historical military art. He currently lives in the town of Nowy Sącz, where he catalogues artefacts for a monument preservation bureau and serves as a guide at the District Museum. This is his first contribution to Osprey's military list.

DAVID NICOLLE worked in the BBC Arabic service for a number of years, before going 'back to school', gaining an MA from the School of Oriental and African Studies, London, and a doctorate from Edinburgh University. He later taught world and Islamic art and architectural history at Yarmuk University, Jordan. He has been a prolific author of Osprey titles for many years.

GERRY EMBLETON has been a leading illustrator and researcher of historical costume since the 1970s, and has illustrated and written Osprey titles on a wide range of subjects over more than 30 years. He is an internationally respected authority on 15th- and 18th-century costumes in particular.